Who's the Bravest of Them All? Interfaith Leaders

Four nights after the Tree of Life synagogue in Pittsburgh was assailed by an armed gunman, I went to a synagogue in a strip mall in Florida and heard the voices of hope.

Barry Silver, an outspoken rabbi with a shock of grey black hair, leads the synagogue L’Dor Va-dor in Boynton Beach, FL. Within 72 hours of the massacre, he pulled together a service led by the Interfaith Justice League to honor the lives lost and address the pain of a close-knit community.

In his email explaining the purpose of holding the service Silver said, “Jews are strengthened by allies of all faiths as we combat anti- 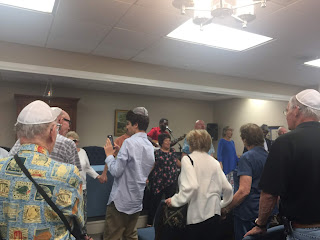 Semitism, racism and violence in all forms. “

The interfaith service was held in a sparsely adorned room with folding metal chairs. Young and old, black, brown and white, the worshippers were a diverse group. About 25 percent of the full house was the temple’s regular congregation.

When I arrived Silver’s 93 year-old mother Elaine was speaking about her basic optimism in the face of adversity.  Shafayat Mohamed of the Darul Uloom Islamic Center in Pembroke Pines spoke of how much stronger we are when religions unite in times of struggle.


A young black man named Julius Sanna, a pastor at Joy Church in Delray Beach, came to the stage with his guitar and sang “We Shall Overcome,” the anthem of the civil rights movement. Everyone joined hands to sing, "We shall overcome someday. . ."