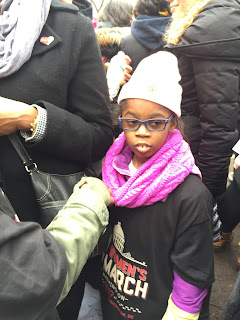 
Since I am a writer and publicist it's important for me to know what people in DC and around the country are saying about what's happening in the world.

My daily dose of Trump outrage comes in many forms. Emails from political candidates with one word come ons in all caps flood my inbox as quickly as I can disengage from their lists. The news - which I get from NPR, the New York Times and the Washington Post - all of which I trust to at least give me the facts of what happened, are starting to play along. Plus various interest groups, newsletters, people, etc. that I have signed up for send me missives all day long.

Then there is Nita and Shauna of Ultraviolet, the queens of screaming in all caps, that I keep around because they want to eliminate sexism but are just too loud. Add to that Twitter, Facebook, and other social media and the comment sections of media that I actually read and contribute too. Aimee and her arguments with bots - how pathetic is that?

I even will briefly stomach Fox News to understand what the rest of us are up against.

But I just cannot take it anymore. Any of it. We are living in an alternate universe manipulated by a master at it, our president, and an endless cycle of "info wars" spews stuff out to see what sticks. Mainstream media plays along and debates everything Trump does as though it is not his "flavor of the moment" but something that if discussed could be addressed. That's ludicrous but at least they haven't brought out daily scorecards of who is winning. Did I mention that I don't watch CNN. I'm sure they have them.

The worst part of this American nightmare our country created and is now trying to survive in is that a 24 hour news cycle all of it is in front of us all day, all night. Last night I dreamt - how can I make this stuff up - that I was sitting in a board room with Donald Trump and he fired me. Just turned and looked me straight in  the face (which he does not appear to have done with any of the other people whom he fires). Probably my resting brain went back to The Apprentice's first season some of which I actually watched.

So I will be brave. I will take the pledge to only look at the news for 30 minutes a day. I will read novels of which I have several sitting on my bed beckoning me. I will write more. I will market more. The world will go on without me. And hopefully when I wake up every morning it won't be with that crushing sense of dread that we have all come to recognize as the new normal.
Posted by Aimee at 6:27 PM No comments: